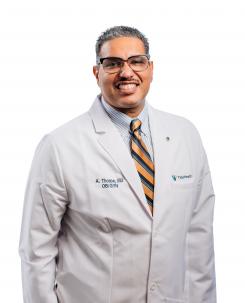 Please note that Dr. Thorpe is only scheduling gynecology patients at this time.

Dr. Arthur N. Thorpe, Jr. has joined TidalHealth in Salisbury, MD as the Medical Director of the Obstetrics and Gynecology service line. Dr. Thorpe was born in Durham, NC, and moved to Washington, DC, at an early age. Dr. Thorpe graduated from St. Johns College, H.S. in 1987 and then entered Howard University to pursue a degree in Electrical Engineering, graduating in 1992. After obtaining his bachelor’s degree he then went to work for the Hoechst Celanese chemical company in Houston, TX, and Providence, RI.  In 1994, Dr. Thorpe decided to pursue graduate studies in Electrical Engineering at Howard University. His coursework and research involving the application of laser technology to clinical medicine sparked Dr. Thorpe’s interest to pursue medicine as a career.

Dr. Thorpe began Howard University College of Medicine (HUCM) in the fall of 1997, graduating in 2003. While at HUCM, Dr. Thorpe found his calling to become an Obstetrician and Gynecologist. Following graduation, he completed residency in Obstetrics and Gynecology at York Hospital in York, PA. While a resident, Dr. Thorpe was a Felix Rutledge fellow in Gynecologic Oncology at the MD Anderson Cancer Institute in Houston, TX and also received an award from the American Association of Gynecologic Laparoscopists (AAGL) for his skills with endoscopic procedures. Dr. Thorpe served as Chief Resident his final year of residency. Following residency, Dr. Thorpe completed a fellowship in Minimally Invasive Gynecologic Surgery at Halifax Medical Center in Daytona Beach, FL.

Dr. Thorpe is accepting new patients at his practice in Salisbury. Prior to joining TidalHealth, Dr. Thorpe worked as a Gynecology hospitalist with AdventHealth in Orlando, FL. Dr. Thorpe is Board Certified in Obstetrics and Gynecology and practices as a Urogynecologist/Minimally Invasive Gynecologist.

Use our online scheduling tool to reserve an appointment slot.

Arthritis is the leading cause of disability in America. More than 50 million adults and 300,000 children are suffering with...

The Wound &amp; Hyperbaric Centers® at TidalHealth Peninsula Regional and TidalHealth Nanticoke, members of the Healogics network, are helping raise...

Lyme disease is the most common disease spread by ticks in the Northern Hemisphere. Tiny blacklegged ticks, also known as...